George is one of Two young riders from the North Midlands area the Tom Simpson Memorial Fund gave grants to for the 2019 racing season. 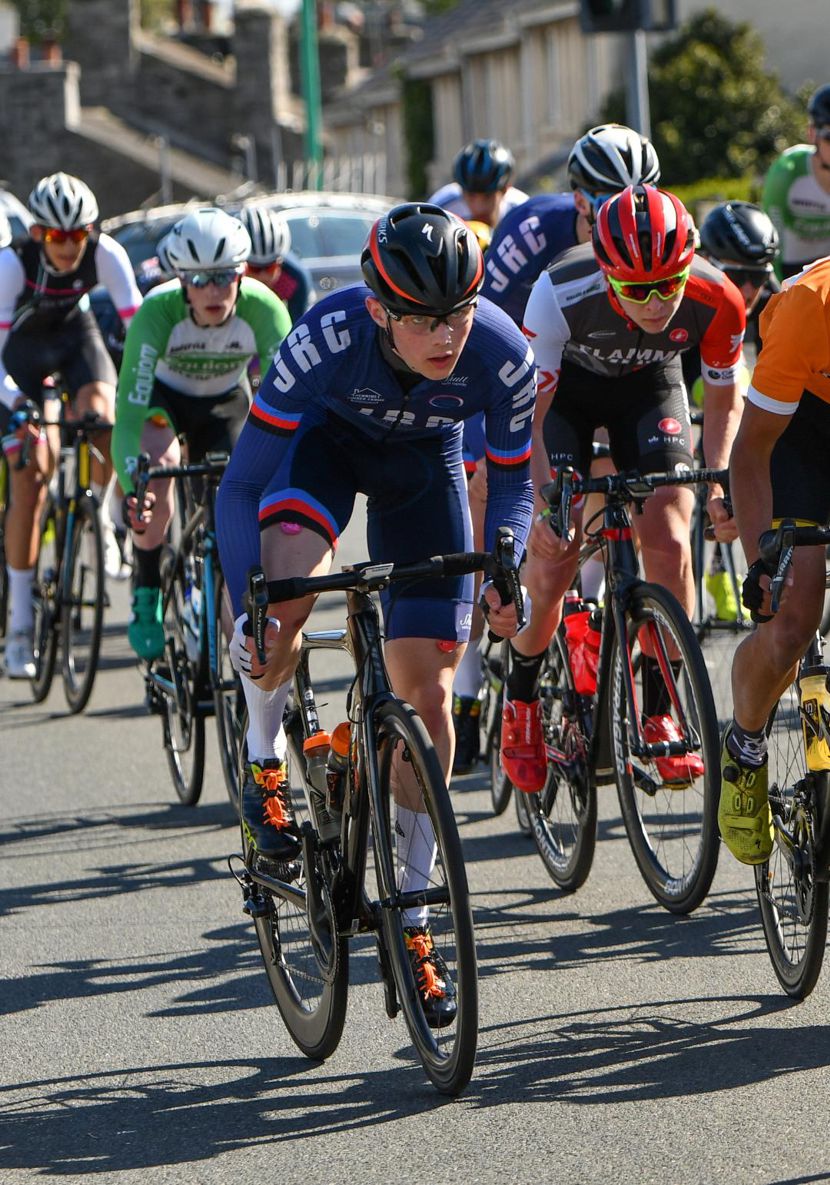 January
The season began with four winter series races including a first win at the Woolly Mamil criterium series in Stourport.

My selection for the Vitfor Future Champions Project was confirmed and I was incredibly proud to have got a spot on something I worked very hard for. The project is headed by Craig Stevenson, Performance Director at Vitfor. I had performance testing at the OTE Lab in Leeds and was selected due to the potential identified through that testing. The programme provides me with privately sponsored elite level coaching for cycle training, strength and conditioning and nutrition support.

February
This was a busy month off the bike including a French A-level trip to Paris. I went to Harrogate to meet my Vitfor Coach, Huw Spacey, and the strength and conditioning coach Byron Spence as my start on the full Future Champions coaching programme.

Some races were cancelled due to bad weather this month, so I only raced the final Woolly Mamil race, which I won to secure a 2nd place overall in the series.

I did the Tom Simpson Memorial Ride, which I really wanted to do as a rider supported by the fund. I had the opportunity to meet Chris Sidwells who put the fund’s faith in me, and Chris introduced me to Barry Hoban, what a pleasure and an honour to meet them both.

The Team JRC weekend training camp was an opportunity to forge some valuable team relationships and develop race craft out on the road, plus a killer turbo session and learning more about nutrition and anti-doping.

March
This month Giant Sheffield confirmed their commitment to be my bike sponsor for 2019. I picked up a Propel Advanced Pro 1 with full bike fit service and fantastic support from Andy and the team at Giant Sheffield.

Much more racing this month albeit in some tough weather at times. In a mixture of racing 3/4 category races and E/1/2/3 races I managed to reach the 40 points needed to become a category two rider by the middle of the month, so that was step one in my 2019 goals achieved, and improved chances of selection for the national series races.

Good placings in the last two Wakefield Winter Series races gave me 22 points in total. Riding the Eddie Soens race at Aintree was a great experience, I was able to ride with other team mates from Team JRC, and in an impressive field of professional teams.

With Cat 3/4 races now not available to me because of my new second category status I rode the elites and first, second and third category race at Darley Moor, finishing 18th and beating some pro riders. I was also the first junior in that one.
Next day I rode the Seacroft Wheelers 2/3/4 race, which was hard and I suffered a lot towards the end after the Darley Moor race the day before. Altogether a weekend of 90 miles of racing and a step up.

I finished 3rd in the Harvey Hadden circuit race at the end of the month and won a bunch of flowers for Mum for Mother’s Day!

April
The Easter school holidays was an opportunity to have a catch up with my coach, Huw and to go through a revised S&C programme from Byron Spence. The extra time available in the holidays was used for a hard training block in preparation for the Isle of Man Junior Tour next month and also a higher than normal volume of racing.

Training also included Team JRC events. One track training session at Manchester velodrome was a welcome opportunity to get the track bike out and get the legs turning fast. Then I had a road training day based at Edge Hill University mid-month, which was a great day of road skills and workshops.

I raced the SB Hub Development Road Race in Lancashire, after 55 miles and on the climb to the finish I was positioned for a top 10 place but came off the road into a rut during the sprint and so my race came to a disappointing and painful end.

It was disappointing not to be selected for the Junior National Series Tour of the Mendips, which prompted much discussion about how to maximise the chances of getting selected for the next junior national races. All avenues are being explored including team entry, either as Team JRC, or by being selected for a Yorkshire team as this seems to take priority.

I raced four circuit races mainly for 2/3/4 category riders, finishing on the podium in three out of the four races and accumulating points in each one to help towards getting my category one.

I also competed in my first time trial at the Roadman’s 2 up TT riding with team mate Dan Kucerjavijs finishing 8th which we were pleased with as our first team effort in a TT after a I dropped my chain on a hill.

On the 28th I raced again at the SB Hub Development Road Race, riding a more tactical race and finished 3rd in the sprint finish against a strong field. I was one of three juniors in the top 6 and secured a useful 21 points towards my Cat 1 goal.

With the Isle of Man Junior Tour at the start of May and following the good news that JRC had been selected for the Cadence Junior National Series Road Race in mid-May. It looks like an exciting month.